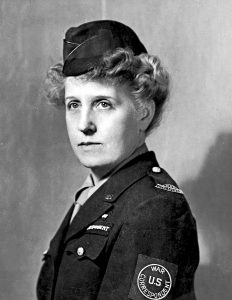 On New Year’s Day in 1935, American reporter Sigrid Schultz witnessed raucous celebrations in Germany’s Black Forest. Shooting rifles into the air, the members of the fast-rising National Socialist party celebrated their leader’s rising hegemony over the German political landscape. Their leader was Adolf Hitler and they were Nazis.

Schultz recorded all she saw and sent it via telegram to her editor at The Chicago Tribune:

Schultz had been the Chicago Tribune’s Central Europe Bureau chief for nearly ten years by that time—the first woman to hold the post in a major news organization. Her reputation for fair and fact-based reporting had gained her the trust of Hermann Göring, the man who would be Hitler’s second in command. It helped that she was a trained chef and gracious hostess who held dinner parties that lured her subjects and gained their trust. From this position of access, the journalist was to get inside information in order to report—and forewarn—of the Third Reich’s insatiable hunger for power and unquenchable thirst for violence that led, ultimately, to the Holocaust.

It was nothing short of remarkable that an American woman was allowed entry into the inner sanctum of the Nazi party. Sigrid Schultz had been born in Chicago and emigrated to Paris with her family at eight years old because her father, a Norwegian immigrant and an artist, had secured several commissions there. Her parents separated within a year and Schultz later wrote in an affidavit explaining her foreign residence that she only saw her father three more times. Her mother continued to live with her in Germany.

Demonstrating a natural aptitude for language, Schultz spoke English, French and German, her mother’s native language. She secured positions as a language teacher in Berlin during the First World War when, according to some sources, her mother fell ill and they could not return to America. When the Chicago Tribune was seeking multilingual in-country reporters, Schultz secured the job, rising to bureau chief by 1926.

But with the growing power of Hitler’s Nazi party, Schultz’ job became more dangerous. While she saw clear evidence of Hitler’s evil intentions for war and Jewish extermination she had to remain impersonal in order to maintain her position of access—especially after other Allied journalists had been expelled from Germany. Taking extreme risks, Schultz filed her most explosive and revealing reports under a pseudonym while traveling outside of Germany.

Göring came to suspect Schultz and was enraged by her intrepid reporting, calling her “that dragon from Chicago.” He had several attempts made on her life yet she outsmarted him every time. Realizing the escalating danger of her position, she sent her mother back to the United States to live in their Westport home in 1938. Eventually the reporter was forced to leave Germany after being injured in an Allied air raid. She recuperated in Spain but came to back to Westport recover further. Schultz attempted to re-enter Germany and resume her reporting but her visa was denied.

Sigrid Schultz lived in Westport for another forty years. From her home at 35 Elm Street, she continued to write tirelessly about antisemitism and the dangers of national extremism. A treasured neighbor and friend, Schultz was well known throughout the town and was a woman of many talents—including as the writer of a number of international cookbooks .

Today a group of Westporters who remember Sigrid Schultz are working to place a commemorative plaque at the site of Schultz’ former downtown home, which was bulldozed, along with others, to create a public parking lot.