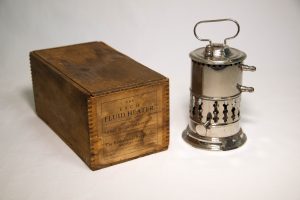 It’s October or “Spooky Season” as my teenage daughter likes to call it. There is good fun in getting a good fright. After all, who doesn’t love a good scream from time to time?

Here at the Museum, we host Spooktober, a month of programming paying homage to the creepy and sinister events that are the hallmark of this time of year.

From our resurrection of author Washington Irving to retell his macabre story about the headless horseman from his famed book The Legend of Sleepy Hollow to our always-anticipated cemetery tours on October 12th and 19th to our Haunted House on October 26th–we’re all in on giving you a fun-filled fright.

Because we are history museum, we like to base our Halloween happenings on real stories from the past. Westport, like other colonial-era towns, has plenty of scary events from days gone by. At our First Annual Haunted House last year, we featured the story of Westport’s Witches, four local women–Mercy Disbrow, Goodie Miller, Elizabeth Clawson and Mary Staples–who were targeted in the panic and terror of the witch trials that plagued New England and which began in Salem, Massachusetts in 1692.

Mrs. Miller was considered unusual in her behavior and Mrs. Staples was shunned for being outspoken. Suspicion also fell on Mrs. Staples as she had previously been accused in 1653 during the Connecticut Witch Panic. Mrs. Staples was known for being “shrewd” and had little patience for Puritan extremes—a criminal offense in Connecticut, a colony known at the time to be far more stringent in its religious ways than even the Massachusetts.

During last year’s Haunted House we also shared ghoulish histories closer to our own times: In the late 19th and early 20th centuries, Westport was the home of two concerns that made money on the business of the death. The Embalmers Supply Company (ESCO) made its preservation fluids at a factory on the Saugatuck River and the Saugatuck Manufacturing Company also on the riverfront, employed children in its trade of making buttons.

So, what frights do we have in store for you at THIS year’s 2nd Annual Haunted House? Why not join us and see? Get into your costumes and join the other goblins, ghosts and ghouls that will be convening 25 Avery Place on October 26th at 6pm for the most historically spooky Halloween event in town.

And who knows, you might actually get a peek at one of the real ghosts who frequent the Museum headquarters at Bradley-Wheeler House …