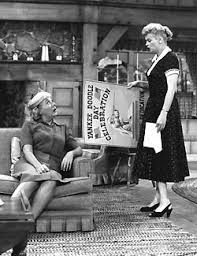 Through the years, the town of Westport has both been home to actors and directors as well as the backdrop for both the big and small screen. Films like The Man in the Grey Flannel Suit from 1956 and 2018’s Land of Steady Habits used Westport as a foil to explore hidden themes of the somber side of suburban life.

Outside of town cameos, The Westport Historical Society has had its own share of roles as “character actor.” Happily, our parts have largely been of the comic sort.

It may come as a surprise to many but at Westport Historical Society we like nothing better than to laugh at ourselves. Stop by on any given day and  what you’ll notice after you enjoy our eye-opening new exhibits, engaging programs and newly renovated gift shop is the fun banter, the laughter and general high spirits. Even though we’re always working hard to fulfill our mission in the best 21st century style, we have a lot of fun too.

We take our mission very seriously. Ourselves? Not so much. (Anyone who follows our Instagram account Betsy_and_Sam will tell you that.)

That’s why nobody is getting a bigger laugh at the current send up of the Society (Rebranded as the “Westport Historical Guild”) on ABC’s hit comedy, American Housewife. A regular feature of the current (and past seasons) the “Guild” is a passion of the main character’s husband, Greg who is ever at the ready for a re-enactment or an onion pie baking contest (an homage to the town’s onion farming history.)

Certainly, the Guild’s denizens are over the top. One member has a humidor especially for his 18th century pantaloons collection. Others engage in a friendly game of “mead pong” at the Guild’s annual gala in a barn that looks suspiciously like the interior of our own Cobblestone Barn.

(As a point of historical fact, mead is so 12th century—not our sort of thing at all. Honey beer, though, that’s another story! Make sure to check out our Garden Cocktail Party June 8th to try some.)

If we’re honest we can certainly see a bit of ourselves in these portrayals. The show is informed by the memories of its writers– former Westporters who, presumably, hit the Historical Society in elementary school for an annual tour.  Who among us hasn’t met a history buff with such exuberant passion for his or her subject that they border on the comical. Sometimes, we are guilty of that ourselves.

And since history is our bag, I’d be remiss not to point out that our comic chops go way back. In the late 1950s the hit show I Love Lucy decamped from New York City to Westport, where Lucille Ball as Lucy Ricardo tried to acclimate to suburban life including joining the Westport Historical Society. (It should be pointed out that in Desi Arnaz portraying a Cuban immigrant band leader, Ricky Ricardo, as married to all-American girl Lucy, in I Love Lucy was groundbreaking in its own way.)

The Historical society along with our friends at the Westport Garden Club and the Westport Woman’s Club also get the Lucy treatment the series as America’s beloved redhead turns the town upside down with her zany antics.

In the show’s final episode, Lucy accidentally backs over the beloved Minute Man statue, causing her to wail in a frenzy “I’ll be drummed out of the Historical Society!”

It is true that we’d never find the destruction of the Minute Man a laughing matter but drumming Lucy out of WHS? Never!