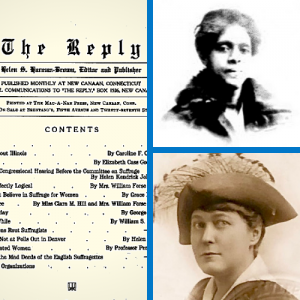 In the years leading up to the Nineteenth Amendment, Addie Hunton (1866-1943), Eleanor Egan Franklin (1879-1925) and Helen S. Harmon-Brown represented the diversity of positions women brought to the issue of women’s suffrage during a tumultuous decade.

Addie Hunton was one of the first African American women recruited by the YWCA and volunteered in 1918 to serve segregated African American soldiers in France. Hunton’s support for women’s rights to vote merged with her war experiences and took her towards the politics of Pan-Americanism. Eleanor Egan Franklin was a war reporter whose war travels eventually tempered her anti-suffragist outlook. Helen S. Harman-Brown was the editor of The Reply, the New Canaan-based anti-suffragist magazine and remained ardently anti-suffragist.

Through the parallel lives of these three women, this discussion with Westport author Dr. Sharmistha Roy Chowdhury highlights the contestations of ideals and the forgotten politics of race and class in the campaign for the Nineteenth Amendment to the United States Constitution.

There is no charge for this event however reservations are recommended, register online here or call (203) 222-1424 x5. Light refreshments will be served. Donations are appreciated and can be made on the reservation form.

Dr. Chowdhury works in modern world history with research and teaching interests in the history of modern Europe, modern India, and the modern Middle East. She is especially interested in twentieth-century literature produced in these areas, in the forgotten texts of the interwar years, the world wars and of the Indian freedom movement. Dr. Chowdhury is currently working on two book manuscripts. One is on the intellectual culture of interwar French military officers. The other is a historical novel set during the 1947 Partition of India. She enjoys writing in different keys (those who know her will recognize her Round Table) and can’t recommend the practice enough.