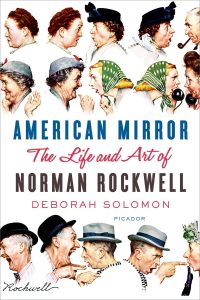 To complement the Westport Historical Society’s exhibit about George Hand Wright, discuss American Mirror: The Life and Art of Norman Rockwell by Deborah Solomon. George Hand Wright was an illustrator who moved to Westport in 1907 during the Golden Age of Illustration. He was not a part of the Famous Artist School (that’s in the 1940s), but he was definitely central to the artist community that was growing at the turn of the century. He worked in pastel and watercolors as well as etching.

As the star illustrator of The Saturday Evening Post for nearly half a century, Norman Rockwell mingled fact and fiction in paintings that reflected the we-the-people, communitarian ideals of American democracy. Freckled Boy Scouts and their mutts, sprightly grandmothers, a young man standing up to speak at a town hall meeting, a little black girl named Ruby Bridges walking into an all-white school―here was an America whose citizens seemed to believe in equality and gladness for all.

There is no charge for this event but registration is recommended, to register,  Click here.