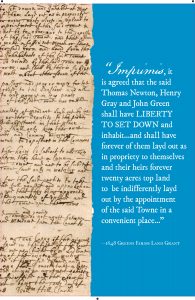 Westport Historical Society’s new exhibit “Liberty To Set Down: Migrants and Immigrants in Westport Connecticut” is produced in collaboration with The Westport Library. The exhibit explores the contributions of those who settled in Westport from its earliest days to the present. The exhibit title comes from the original land grant given to the Bankside Farmers in the 17th century in what is today Greens Farms.  From its earliest settlement in 1648 in the parish of Greens Farms, the area that was to become Westport has been a crossroads of cultural expression. Westport Historical Society and The Westport Library explore how immigrants have long woven the fabric of the town in its exhibit Liberty To Set Down: Migrants and Immigrants in Westport Connecticut. Westport’s immigration story began with the first Europeans who wrested the land from Native People to the forced immigration of enslaved Africans to the later waves of Irish, German, Italian and Polish immigrants of the 19th century to a wide and varied immigration story of the 20th and 21st centuries. January 23th, 2019 through July 31st, 2019.

Join us this Wednesday, January 23 at 6 pm for the opening reception of our newest exhibit.