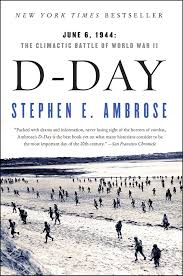 D Day: June 6, 1944: The Climactic Battle of World War II by Stephen E. Ambrose is the definitive history of World War II’s most pivotal battle, a day that changed the course of history.

D-Day is the epic story of men at the most demanding moment of their lives, when the horrors, complexities, and triumphs of life are laid bare. Distinguished historian Stephen E. Ambrose portrays the faces of courage and heroism, fear and determination—what Eisenhower called “the fury of an aroused democracy”—that shaped the victory of the citizen soldiers whom Hitler had disparaged. Drawing on more than 1,400 interviews with American, British, Canadian, French, and German veterans, Ambrose reveals how the original plans for the invasion had to be abandoned, and how enlisted men and junior officers acted on their own initiative when they realized that nothing was as they were told it would be.

This program is free to the public, but reservations are recommended. Reserve your space online here or by calling 203-222-1424 ext. 5. Donations are appreciated and can be made online here. For copies of the book, call the Westport Public Library at 203.291.4821.

Located at the Westport Historical Society.