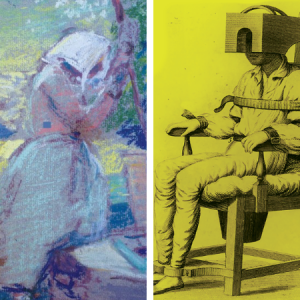 Please join us for the opening ofVision & Dignity: The Art of George Hand Wright, a retrospective that examines the work and life of the Pennsylvania-born artist who moved his home and studio to the then-sleepy farm town of Westport, Connecticut in 1908.

Noted not only for his illustrations but his etchings and pastel work, as well as for producing war posters for the American government during World War I, Wright managed to portray the dignity of everyday life and everyday people without irony or judgement. With almost journalistic objectivity, the integrity of Wright’s pieces speak strongly to viewers observing his pieces today some one hundred years after they were produced.

Also opening Taking the Cure: Public Health 1880-1960, casts a lens on the social management of mental illness. It is an issue that resonates today and historically to the town of Westport which had two sanitariums for those considered mentally ill. The Westport Sanitarium and McFarland’s Sanitarium both opened in the late 19th century operated in town into the middle of the 20th century. The goal of the exhibit is to spark conversation and consideration among visitors in this time when mental health and welfare has become a pressing national discussion.

Refreshments will be served.