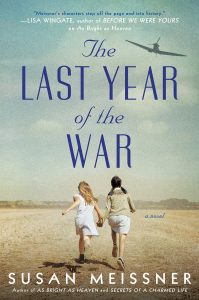 A new series! Join a docent-led tour of our current exhibition followed by a book discussion to gain greater insight into the historical context of the exhibit. Professional moderator Kelle Ruden will lead the book discussions. The Last Year of the War tells a little-known story of World War II with great resonance for our own times and challenges the very notion of who we are when who we’ve always been is called into question.

In the wake of the attack on Pearl Harbor, Elise Sontag is a typical Iowa fourteen-year-old—aware of the war but distanced from its reach. Then her father, a legal U.S. resident for nearly two decades, is suddenly arrested on suspicion of being a Nazi sympathizer. The family is sent to an internment camp in Texas where the only thing that makes the camp bearable for Elise is meeting fellow internee Mariko Inoue, a Japanese-American teen from Los Angeles, whose friendship empowers Elise to believe the life she knew before the war will again be hers. Together Elise and Mariko hold tight the dream of being young American women with a future beyond the fences.

Before our discussion, tour our special month-long exhibit Pearl Harbor, exploring the local connections to the war following “a day that will live in infamy”.

“Meissner has created a quietly devastating story that shows how fear and hatred during World War II changed (and even ended) the lives of many innocent Americans.”—Kirkus Review

This program is free to the public, but reservations are recommended. Reserve your space online here or by calling 203-222-1424 ext. 5. Donations are appreciated and can be made on the reservation form.