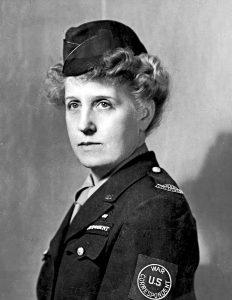 Be among the first to experience Westport Museum’s newest exhibit “Dragon Lady” exploring the life and legacy of Westporter Sigrid Schultz.

Born in Chicago in 1893, war correspondent Schultz was bureau chief for Central Europe The Chicago Tribune in the years leading up to World War II and the first woman to hold that position for a major news service. Fluent in German, Schultz was stationed in Berlin where she witnessed the rise of the country’s National Socialism (Nazi) Party and was acutely aware of the danger the party and its leader, Hitler, posed to the world. Filing her most sensitive stories from various European cities under a pseudonym so as not to jeopardize her entrée behind the scenes of the Third Reich, Schultz was a masterful investigative reporter, and her dispatches provided critical intelligence about Germany’s wartime plans. Nazi party leader Herman Göring called Schultz “the dragon lady of Chicago” and attempted to eliminate her more than once. After being wounded in an Allied Air Raid, Schultz returned to the United States to reside in Westport with her mother, remaining in the town for more than four decades until her death.

Light refreshments will be served.