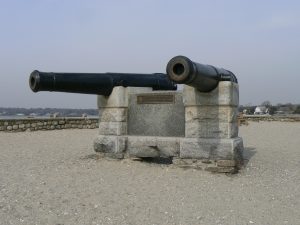 WHS will host Ed Hynes’ lecture marking the 241st anniversary of Tryon’s Raid, the Revolutionary War engagement that began with 1,800 British troops landing at Compo Beach. As many Westport residents may know, the four-day raid, which started on April 25, 1777, saw the British fighting two battles with Colonial forces along the way, led by Maj. Gen. William Tryon, royal governor of the New York province.

Mr. Hynes is a Merrill Lynch financial advisor whose interest in the American Revolution dates to his childhood growing up in Wilton next to a home that was partially burned by Tryon’s soldiers.

Hynes will discuss the raid in the overall context of the war, the commanders on both sides, and “things quite smart and not so smart” on both sides, including how “the Brits outwitted” the Patriots on their return to Compo. This incident took place in our own back yard and highlights an interesting aspect of the war: the extent to which local Colonists were divided for and against the Revolution. Hynes’ talk is also an opportunity to delve into historical events that occurred right here in Westport.

This episode inspired the book “The Bridge Not Taken” by Wilton land surveyor Damon Greenleaf Duncan, copies of which are available in the WHS’ gift shop and will be sold that evening.

Tickets are nonrefundable. In the event you must cancel, we will consider your purchase a refund and will happily issue you a donation receipt.