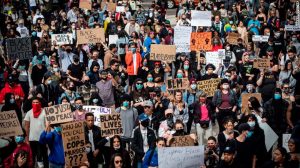 As modern historians, we try to examine history in a holistic way, looking at all sides, examining all perspectives. To do this, we use primary source information for fact-based story telling. Unlike in the past, where history was the story of the victors, we strive to present history in neutral terms presenting artifacts from an earlier time to objectively inform our decisions in the future.

The recent protests over the murder of George Floyd–an unarmed Black father—by Minneapolis police has made it clear that in order to gain a truly holistic picture of the past we must now put neutrality aside.

We must examine our failures in achieving a just and fair society both as a nation and in each and every town within that nation.  We must admit to these failures and to the fact that they have informed the times in which we live today—times that are too often unjust and inequitable especially for communities of color.

Black Americans continue to have dramatically fewer educational, economic, housing and healthcare opportunities than their white counterparts.  According to the NAACP, although African Americans and Hispanics make up approximately 32% of the US population, they comprised 56% of all incarcerated people in 2015. The New York Times reports that data from Minneapolis indicates that the police force used brutality against Black people seven times more than it did for whites. It is a pattern that exists nationwide.

In 1968, following a year of dramatic protest and unrest in the demand for Civil Rights, The Kerner Commission, empaneled by President Lyndon Johnson, noted the failure of the American system in its treatment of its Black Citizens.  The report clearly and unequivocally stated:

These are not facts of a murky past. They continue to be rules of a playbook outlining the systemic and institutionalized racism that is an indelible stain upon the American Republic.

We often invoke the lessons of history as a way to understand the present and future.  But as we work to engage the community we’ve learned a specific truth: It is the myth of “over there” and “back then” that provides covert shelter to the tree of injustice and sustenance to its poisoned fruit.

It is not enough to simply present the facts that, in 1939, a health survey commissioned by the town of Westport said “housing of Negroes” was a disgrace contributing to “insanitary conditions” in the town.  It is more accurate to explain that this kind of pernicious bias is but one example of how institutionalized racism in the healthcare system has today resulted in Black Americans being disproportionately affected by the COVID-19 health crisis.

It is not enough to tell you that, in the 1940s,  Westport’s RTM considered “Negro Housing” at 22 ½ Main Street an embarrassment to the town that was conveniently set ablaze by an arsonist in a conflagration to which the Westport Fire Department did not rapidly respond. The building was completely destroyed and its residents largely left Westport thereafter. It is more accurate to say this appalling history is the forefather of today’s ongoing battle in Westport to block fair, affordable housing opportunities for those considered “lower income”—a population that is disproportionately represented by people of color.

It is not enough to provide evidence that programs like Project Concern and the Intercommunity Camp—1970s programs to offer the benefits of the Westport school system and town amenities to children of color from under-resourced neighboring towns—were bitterly fought by some Westport residents. Ultimately, the programs proceeded for several years because of the work of dedicated volunteers—many of whom where teenagers. But, it’s more historically accurate to identify the spirit behind the opposition as one of the many reasons why Black children in Westport Schools continue to face micro and overt aggression that prove psychological barriers of entry to the benefits of this “superior” educational system.

The time has come to not just reveal these facts with the dispassion of an objective observer from many decades hence but to condemn them as unacceptable and incorrect. It is one way we may stand with those who protest injustice against the Black community and communities of color in America today.

America is a nation born from civil disobedience. Protestors against unjust acts are the standard-bearers of this republic.  History proves this to be true. Colonial governors considered the Boston Massacre and the Boston Tea Party to be uncivil riots. Yet, we know and teach them as the first steps to freedom.

More than the early actors of the American Revolution or the protestors of the 1960s, the justice warriors of 2020 represent a broad coalition of multi-ethnic Americans, including scholars, journalists, educators and historians. We understand that the events of our shameful collective history must be named in order to change.  This is true in every town and every state across the nation–including Westport.

As historians, it is our obligation to use our considerable skill and knowledge for the side of right–in order to help rebuild this Republic into what it should have been from the start. We hope you will join us in this commitment by tuning in, and participating in our programming and sharing your own stories via our Oral History platform: Westport In Focus.

We are at the crossroads of history and we are staring at the signposts above us. One points backwards down a horrible and untenable road. The other points to a better future down a path that is not smooth: It is  a path with twists and hairpin turns. It will, at times, double back and slow our progress.  Still, we must take that path, using the truth of history, fully, as a roadmap for the difficulties behind but also those ahead as we find a way forward.

We hope you will join us on the journey.